Wilmington, Delaware – In December of last year, northern New Castle County, Delaware was captivated by the appearance of the Delabear, a black bear that evaded capture as it roamed Wilmington’s streets. That weekend, Wilmington Brew Works released a ‘Double Delaware IPA’ that honored the Bear, and the social media fervor it inspired.

The brew, which is triple dry hopped with Mosaic, Citra, Vic Secret and Denali Hops, was an instant hit in the taproom and one of the Brewery’s fastest selling brews. “I think people initially tried the beer because of the name, but they returned for more, and purchased growlers and crowlers of it because it really was a fantastic beer,” says Wilmington Brew Works’ COO, Keith Hughes.

Like many craft breweries, Wilmington Brew Works does not have an in-house canning line. When they are ready to package beer for off-premise consumption, they contract with Iron Heart Canning, a company that brings the canning line to them. Iron Heart sets up all the machinery required to package beer in cans in WBW’s production space for the day. Craig Wensell, CEO and Brewer says “Iron Heart’s mobile canning line enables us to leverage industry experts to ensure the products we produce will taste identical, regardless of whether it’s straight out of the tap, or out of a can at home.”

The artwork on the can label tracks the Delabear’s travels through the Brandywine Hundred, into Trolley Square, and back to Pennsylvania. The can states that the 9% ABV beer is “fit for a bear… and sure to lure any bear out of the woods and into your backyard.” 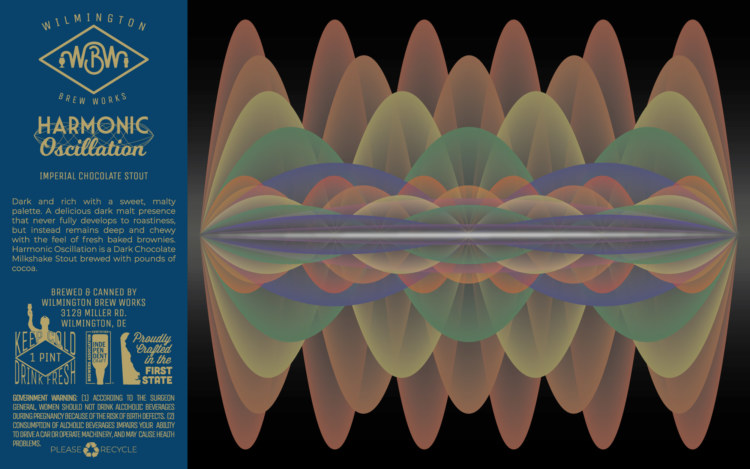 Delabear isn’t the only beer Iron Heart will be canning for Wilmington Brew Works. Harmonic Oscillation (10.2%), an Imperial Chocolate Stout will be released in cans for the first time. The brewery is again canning two of their best sellers; Lupulin Enlightenment (7.3%), a Double Northeast IPA brewed with lactose is one of the brewery’s signature offerings, and Superfluous Nomenclature (4.8%), a Modern Pale Ale that has been available in 16 oz. Cans at Wilmington Blue Rocks and Wilmington Blue Coats games since last summer.

Four-Packs of the cans will be first available for purchase at WBW’s Flights of Discovery series on Tuesday February 11th, with two events scheduled for 6pm and 8pm. Tickets for the events are available on their website, www.wilmingtonbrewworks.com. The cans will go on sale to the general public during their regular operating hours, starting Wednesday, February 12th at 5pm.

Featured in the News