Wilmington Brew Works to release “Rail Car One” to commemorate the First President from Delaware.

Wilmington, Delaware – In Delaware President-Elect Joe Biden is a fixture. Most locals have a story of meeting him somewhere, from ice cream shops to town festivals. But for many, the train between Wilmington and Washington was where they were most likely to run into ‘Uncle Joe.’ Now, the namesake brewery of the city Joe calls home is commemorating his daily commute with a new brew.

‘Rail Car One’ will feature vintage train style artwork of an Amtrak Acela, with the same paint job as Air Force One. “I had joked around with my partners, wondering if there was an official designation for a Presidential Train Car, like there is for an Airplane,” says John Fusco, Wilmington Brew Works VP of Creative and Brand Marketing. “It’s just fun to think of the President traveling back to Delaware on a special train car just for him.”

Craig Wensell, Wilmington Brew Works CEO and Brewer, went straight to work brewing up a style of beer that the Brewery has become known for – the Northeast IPA. “The beer is triple dry hopped with heaps of Mosaic, Citra and Sultana Hops. In this case, we’ll be calling it a Double Delaware IPA, just like our Delabear beer last winter.”

Like many small breweries across the country, the COVID-19 Pandemic has affected how Wilmington Brew Works has done business. They launched a website to enable online purchases of Crowlers and Growlers the day businesses were shut down in early March. In June, when Delaware entered a Phase One reopening, their bustling taproom was converted into spread out table seating with plenty of new outdoor seating.

“To-Go sales really sustained us over the course of the pandemic. We were really hitting our stride in February and March, but a successful business has to be able to pivot when necessary,” said Keith Hughes, Wilmington Brew Works CFO. The brewery has since invested in a canning machine so they can regularly release fresh new cans. This week, in advance of Thanksgiving, they are releasing a Pumpkin Pie Danish Pastry Quad, a Blackberry Vanilla Sour, and bottles of an Apple Pie flavored Cider.

‘Rail Car One’ will be released to the public on December 7th, Delaware Day. It will be available on their website for taproom pickup. The president-elect is known for being a teetotaler, but that hasn’t dissuaded Wilmington Brew Works. As the label says, ‘While #46 may not engage in the occasional tipple, his fine friends in the first state certainly do. And that’s something we can all agree on.’ 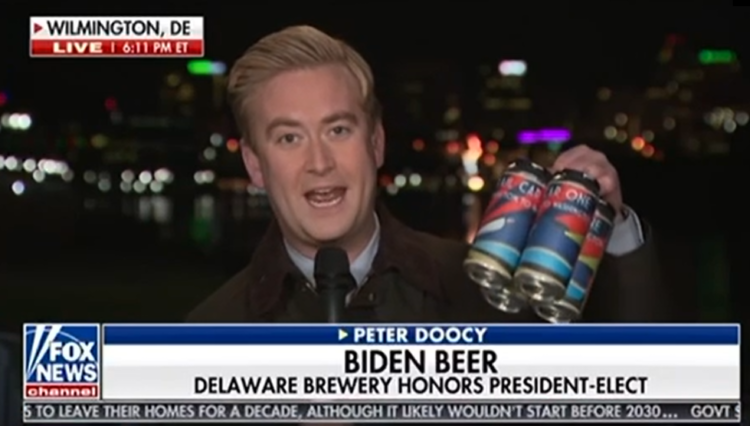